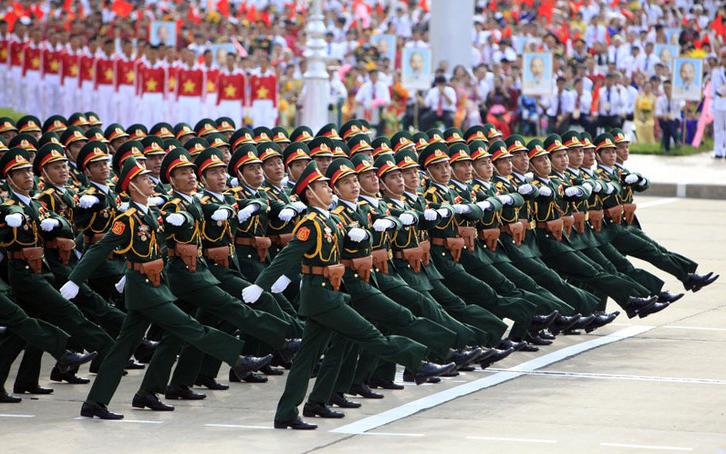 The People’s Army plays a key role in the struggle and defense of the country’s safety and security, ensuring the safety of the people, and upholding national sovereignty and territorial integrity. This article will learn about the position, function and mission of the Vietnam People’s Army.

The army is The concentrated armed forces have the task of being ready to fight to protect the independence, sovereignty, unity and territorial integrity of the Fatherland; protect the regime and the achievements of the revolution.

2. What is the Vietnam People’s Army?

3. Functions and tasks of the Vietnam People’s Army:

According to Article 25 of the 2018 National Defense Law, the functions and tasks of the People’s Army are specified as follows:

December 22 every year is the traditional day of the People’s Army, the national defense festival of the whole people.

– The People’s Army has functions and tasks to be ready to fight and fight for the defense of the Fatherland; carry out the work of mobilizing and propagating the guidelines and guidelines of the Party, policies and laws of the State; productive labor, combine national defense with socio-economic, participate in civil defense, and build the country together with the whole people; performance of international obligations.

– The State builds a revolutionary, regular, elite, gradually modernized People’s Army with a reasonable standing force and a powerful reserve force; some forces advance toward modernity.

see more: Retirement conditions and benefits for officers of the People’s Army

– Organization, tasks, service regimes and regimes and policies of the People’s Army according to the provisions of this Law Law on Professional Soldiers, National Defense Workers and Officials, Law on Military Service and other relevant laws.

3.1. Basic functions of the People’s Army:

In peacetime, the Vietnam People’s Army performs three basic functions, namely: a combat army, a working army and a production army. In there:

Battle Army is the key task of the Vietnam People’s Army. To accomplish this task, the Army is organized into two components: the standing army as the core and the armed masses. Three types of troops: the Main Force, the Local Army, and the Militia and Self-Defense Force.

The People’s Army is organized in a lean direction, equipped with appropriate weapons and equipment, regularly practices training, improves combat readiness and combat, firmly maintains its political nature. firmly grasp the national, regional and international situation in order to take appropriate combat measures and promote international cooperation; properly analyze and forecast situations and risks that may lead to political upheavals; advise the Party and State to have timely guidelines and countermeasures, so that there are no strategic surprises.

Being one of the core forces in rescue and relief work, helping people to prevent, combat and overcome consequences of natural disasters, fires, natural disaster mitigation, sacrifice themselves in danger to save lives and properties. of the people.

The army also has the task of mobilizing the masses, building the grassroots political system, propagating the lines, guidelines and policies of the government, countering distorted, libelous and untrue arguments. .

Tackling the consequences of war includes: Checking, clearing landmines, decontaminating the environment and post-war policies. In difficult, remote and remote areas, the army is also responsible for carrying out mass mobilization work, taking the lead in socio-economic construction and development in these regions, universalizing education and taking care of people. medical care to the people.

The production function of the army is also reflected in factories, defense industrial enterprises, economic units of the army… Economic production activities of the military force are also aimed at helping people exploit fallow, renovate fields, build wet rice fields, plant grass for cattle raising; support capital to build houses and seedlings, help with production techniques, fight against migration and welcome people from the backline to settle down, helping people to stabilize their long-term lives.

– The whole army needs to continue to thoroughly grasp the Party’s viewpoints, guidelines and lines on the task of defending the Fatherland in the new situation. Thoroughly grasp and firmly grasp the contents, principles and solutions of the Strategies, closely follow the actual situation, advise the Party and State on strategies and tactics, ensure timely and successful handling in all military and defense situations.

The strategic agencies of the Ministry of National Defense ensure that there is always a reasonable structure and organization; building and training a contingent of strategic advisors with extensive theoretical and practical knowledge.

Continue to improve the quality of training and combat capabilities in the entire army. Step up the construction of the defense area, ensuring that you can win from the first day, the first match.

– Continue to build the military Party Committee and Party organizations that are clean and strong, both politically, ideologically, ethically and organizationally. Constantly cultivate and improve the comprehensive leadership capacity and combat strength of party organizations and members.

– Do well the mass mobilization work in the whole army, mobilize the masses, contribute to building a solid position of the people’s hearts, and maintain the relationship of flesh and blood with the people.

– Promote international integration and improve the effectiveness of defense diplomacy both at multilateral and bilateral levels.

The political system in the Vietnam People’s Army has the following levels and names:

see more: 10 oaths of honor of soldiers of the Vietnam People’s Army

As the leading technical management agency of the Ministry of National Defense, which has the function of organizing, managing, researching and ensuring weapons and means, and equipping combat techniques for the troops and branches of the armed forces.

College of Automotive Technology and Engineering

see more: Investigative agencies in the People’s Army can investigate crimes committed by people outside the military

Institute for Strategic Research in Information and Telecommunications Engineering (V34)

As the leading logistics agency of the Vietnam People’s Army; has the function of advising, directing, and organizing material security, daily life, military medical care, transportation, etc. for the army.

Journal of Defense Industry and Economy