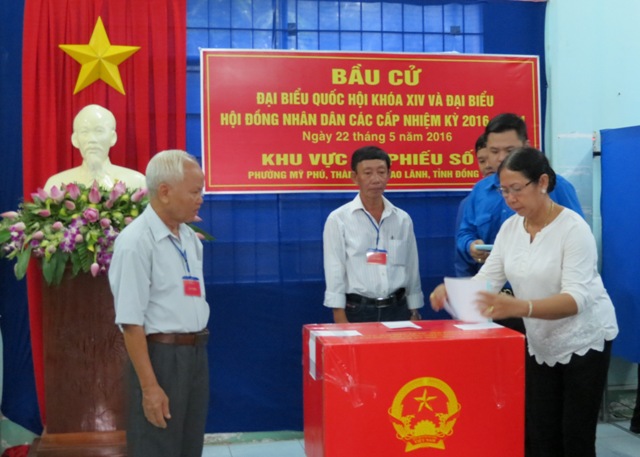 The most detailed branch election today. The branch meeting is an important activity in order to summarize and evaluate the activities of the branch in the previous term, set the direction and operation method, and elect the Executive Committee. new to lead the branch in the next term. Preparing well for the branch congress is the duty of each union member, the Executive Committee of the branch needs to assign work appropriate to the ability of each member. During the organization of the General Assembly, the election of a new Executive Committee is extremely important. The following article will help people learn about the sample of the vote counting minutes for the branch election and instructions on how to draft this form in detail.

1. What is the vote counting minutes for the branch election?

The branch congress is usually held at the beginning of the year to summarize the training process of the union members in the old year, and through that to elect a new executive committee to lead the branch and issue resolutions and directions. strive for the new term. In order to elect the executive committee, the role of the vote counting minutes of the branch election is very important.

2. Sample minutes of vote counting for the branch election:

Electing the Executive Committee of the branch for the term 20…..-20……

The General Meeting elects the Vote Counting Committee including:

The votes for the Branch Executive Committee were counted as follows:

According to the principles of election rules, the following comrades were elected to the Executive Committee of the branch …….

Our Vote Counting Committee makes a report before the meeting and serves as a basis for the higher-level delegation to recognize it.

Minutes ends at…. time of the same day.

3. Instructions for drafting the form of the vote counting minutes of the branch election:

+ Fill in all information including National title, motto.

+ Name of the school group and the name of the branch.

– Main body of the minutes:

Full name of the congress to elect the vote counting committee.

+ Full name of the comrade elected to the Branch Executive Committee.

– The last part of the minutes:

+ Time to end the record.

+ Sign and write the full name of the representative of the Presidium.

+ Sign and write the full name of the representative of the vote counting committee.

4. Regulations on election of the branch congress:

– The election of the executive board:

+ The election of the delegation can be done by secret ballot or by voting.

+ Therefore, the branch congress elects the executive committee or elects secretaries and deputy secretaries all by secret ballot.

+ When conducting an election, more than one-half of the people present must agree for the elected person to be elected.

+ The list of elections after being available will have to be discussed and approved by the general meeting of delegates.

– About how to vote:

+ Based on the list of candidates approved by the congress (including … comrades), each delegate can vote a maximum of … comrades out of the total number of candidates.

+ If a delegate trusts someone, he or she agrees to that person; If you don’t trust anyone, mark disagree, do not check between the 2 boxes or any other signs. Absolutely do not sign the delegate’s name or private symbol on the ballot.

+ When voting is completed, delegates vote by themselves in the ballot box located at the specified position in the hall.

After voting, delegates must wait to hear the results of the counting of votes.

For the branch, the ballot will usually be used by handwritten ballot, so for the ballot the instructions are as follows:

+ Valid votes are those issued by the Organizing Committee of the General Meeting.

+ The ballot is pre-printed with the list of elections approved by the General Assembly in alphabetical order.

+ Voting ballots with sufficient number of votes (namely, .. comrades); or less than the number of people to vote (specifically, less than .. . comrades), but not all names on the list. (Example: If you have a list of 5 people to choose from, you can write 3 names on that list, or just write 1 person’s name is also considered a valid vote).

+ It is necessary to write clearly the name of the voter, without signing, without marking symbols.

There are 6 cases below are considered invalid votes:

+ The returned ballot is not issued by the vote counting committee, also known as a fake ticket.

+ The ballot is crumpled, crushed, unknown name (wrong name or spelling error but the Vote Counting Committee does not clearly identify who to vote for).

+ A ballot to write the name of the person outside the electoral list.

+ Voting no-one is also known as abstention. If there is only 1 person on the electoral roll, it is considered valid.

+ Signing slips, marking strange symbols and numbers, written votes in general, such as: I agree to vote on the entire list…

+ The winner must have the total number of valid votes cast more than 1/2 of the number of people participating in the election (calculated by the number of votes collected and must be counted from high to low).

Example: The branch has a total of 40 members. Attending the Congress, only 38 union members participated in the election. The electoral list after being voted on includes 5 people; The number of executive committees to be elected is 3.

The voting results are:

Number of votes issued = 38; the number of votes collected was 36. (because maybe 02 union members received the votes but for some unexpected reason they did not vote).

Thus, the winner must have at least 17/32 valid votes in his or her name. Invalid votes with anyone’s name on them will not be counted. However, the invalid vote still has an effect on the result because it is still included in the total to calculate the rate. (For example, if someone gets 17 votes but falls in 2 invalid votes, only 15/32 votes are counted, so they won’t win the election).

However, even though he received 17/32 votes, he still might not be elected because the order of his votes was below the number of votes. (eg: Voting list of 5 people to get 3 people. Even though they won more than 1/2, they were placed in 4th place, so they still didn’t win the election).

+ In case of voting for the first time but still not enough number of people have decided to vote, whether to continue voting or not depends on the congress or conference.

+ If the congress or conference conducts a second election but still lacks the number of votes, the election will not be conducted. If it is to elect key positions of the Union, then report to the Party Committee and the immediate superior delegation for decision, if it is to elect a delegate to attend the meeting of the higher-level Union, then report to the Executive Committee of the level to convene the congress to decide. determined.

5. Guidelines for the preparation of the branch congress:

+ To plan the organization of the congress on the basis of the direction and direction of the superior delegation. The plan should clearly define: the time and place of the meeting, the main contents of the meeting and the assignment of people to prepare.

+ Statement of reasons, introduction of delegates.

+ The meeting discussed the report, direction and review. (discussing the report of the branch and giving comments to the delegation – The University President led the discussion, focusing on measures to implement in the direction)

+ The representative of the superior delegation gave his opinion

+ The chairman of the meeting answers and explains the union members’ opinions, decides to withdraw or not to withdraw from the electoral roll. The General Assembly voted to agree on the list of elections.

+ Conduct the election, announce the results, the new Executive Committee is launched.

Approval of resolutions of the general meeting.

– How to organize a branch meeting:

The branch congress is an important political activity, which must be carried out seriously and in accordance with the rules and regulations.

+ Time: The branch must choose a time to hold the congress in accordance with the favorable conditions of the majority of union members to ensure that the union members can fully attend.

+ Venue: The branch meeting should be held in the hall, meeting room, classroom… to create a serious atmosphere. Guests: Representatives of the upper-level Union, teachers and staff, youth squads of the Youth Union, etc.

+ The slogans: “Live and fight, study and work according to the great Uncle Ho’s example”…

+ There should be vases of flowers on the chair, secretariat, and guest delegates’ tables.