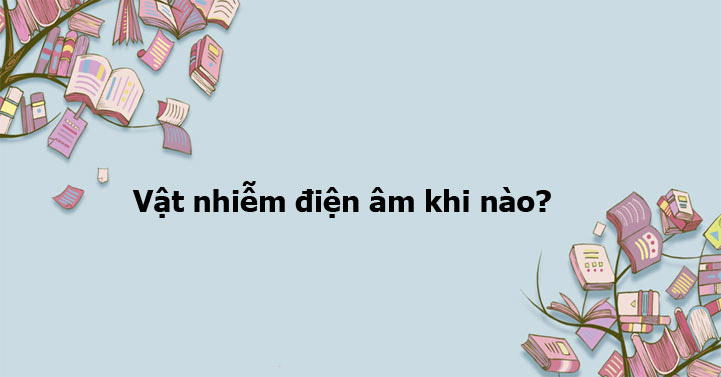 1. When is an object positively charged?

An object becomes positively charged when it loses electrons.

Example: Rubbing a plastic ruler on a dry piece of cloth, after rubbing, the cloth loses electrons, so it becomes positively charged.

2. When is an object negatively charged?

An object becomes negatively charged when it gains an additional electron. In other words, when the number of electrons is greater than the number of protons.

3. How to identify a positive or negative charged object:

Electrification is the accumulation of electrical charges on the surface of a non-conductive material.

Many objects, after being rubbed, have the ability to attract other objects.

– Many objects, after being rubbed, have the ability to light up the lamp of the electric tester.

– An electrically charged object, when rubbed, has the ability to attract other objects;

– When an electrically charged object is rubbed, it is capable of brightening the electric tester;

see more: What is the rated current? Symbols, formulas and calculations?

Based on the characteristics of an electrified object, it is capable of attracting other objects or releasing sparks to other objects, so if we want to know if an object has been electrified or not, we need to bring the object to be recognized.

You can easily see electricity in everyday life. Such as:

– On cold days, you often wear a hat to keep warm when going outside. Then remove the hat, you can easily see the hair being sucked inside the hat. It is between the hair and the hat that are electrified.

– In hot weather, when you use a comb to melt your hair, you will find that the hair is attracted by the comb and pulled straight out.

When you brush, you accidentally create friction between the comb and your hair, so both are electrified.

– Long-term use of electric propellers has a lot of dust on the edge of the propeller. If you see dust on the surface of the table, you can easily blow it away. While the propeller rotates very strongly, it does not push the dust, even being stuck in reverse. The explanation for this phenomenon is also electrification due to friction.

In fact, there are many impurities and dust in the air. As the propeller rotates, it frictions with the air.

Specifically, dust particles that are invisible to the naked eye. Becoming an electrically charged object, the propeller attracts dust particles in the air. Make them stick to the edge of the propeller. Accumulating more and more so we can see clearly.

If it attracts light objects, then the object is electrified.

If it can’t attract a light object, the object is not electrified.

Example: When we blow the dust, the dust flies away. The electric fan blows strong wind, but after a while there is a lot of dust clinging to the propeller ⇒ The propeller rubs a lot against the air, so it becomes electrically charged ⇒ The propeller sucks dust particles.

If there is an electrical discharge, the object is already electrified.

If there is no discharge, the object is not charged.

see more: What is magnetic field? Nature? What is the right hand grip rule?

4. How to make an object electrified:

4.1. Make an object electrified by contacting another object:

Between a charged object and an uncharged object. When these two objects are brought into contact
(not rubbing or creating friction) but simply put very close to each other or overlap, the other object will be electrified with the same sign as the electrified object.

The free charges (specifically electrons) inside the charged object move to the uncharged object. Causing both of them to be electrified.

4.2. Make an object electrified by responding:

This phenomenon is called reactive electrification or electrostatic induction.

4.3. Make an object electrified by rubbing:

Simple experiment that proves an object can become electrified

see more: What is refraction of light? Cause and formula?

Use a plastic ruler, scraps of paper, plastic crumbs, or a small ball made of styrofoam.

Bring one end of the plastic ruler close to samples of paper or plastic scraps or foam balls, observe nothing happens.

Objects after being rubbed will have the ability to attract other objects, becoming electrified objects.

To check whether the object after being rubbed is really electrified, you can use an electric tester to check or observe whether they attract other small objects.

5. Applications of electrified objects in life:

The study of electrified objects helps us to explain phenomena in life and apply them in daily life such as making lights on, warming water to boil, etc.

Electrically charged objects can be applied in technical life, for example:

– Tankers carrying petrol and oil often have an iron chain, one end attached to the tank shell, the other end hanging on the road surface when the vehicle is running. Doing so reduces the risk of an electrical charge causing a gas tank to explode. When a gasoline tanker is operating on the road, due to the friction between the fuel tank and the air, the fuel tank becomes electrified. If the charge is too large, it will cause a fire. Therefore, the gas tank has a chain that drags on the ground to neutralize the amount of charge that has adhered to the fuel tank to avoid the phenomenon of fire.

see more: What is mechanical motion? Types of exercises and examples?

– When you comb your hair with a plastic comb, you will see that the hair extensions are pulled up (due to the friction between the hair and the comb causing an electrical charge, so the plastic comb has the ability to attract hair).

6. Some exercises to consolidate knowledge about electrified objects:

Question 1: After a period of operation, the propeller gets a lot of dust because:

A. The propellers rub with the air and become electrified, so they attract a lot of dust.

B. The impeller is damp, so it sucks up a lot of dust.

C. Some slime in the air settles on the fan blades and sucks up a lot of dust.

D. Colloidal dust should stick to the propeller.

see more: On which plains does the Truong Giang River and the Yellow River flow?

Answer A: After a period of operation, the propeller gets a lot of dust because it rubs with the air, becomes electrified, so it sucks up a lot of dust.

Question 2: The car runs for a long time. After getting off the car, touching the side of the car, sometimes it feels like an electric shock. The reason is due to:

A. The electrical part of the vehicle is damaged.

B. The car’s walls rub against the air, so the car becomes electrified.

C. Due to some electrical appliances nearby working.

D. Because there is going to be a thunderstorm outside.

Answer B: The car runs for a long time because the car’s wall rubs against the air, so the car is electrified, touching the wall of the car sometimes feels like an electric shock.

Question 3: In some industries , sparks are often seen between the pulley and the pulley. Explain why?

see more: What is a pulley? Types of pulleys? Classification and applications?

A. Pulleys and pulleys become electrified by rubbing.

B. The pulley and the zipper get hot from rubbing.

C. The temperature in the room then rises.

D. Due to strong rubbing.

Answer A: In some manufacturing industries, sparks are often seen between the zipper and the pulley because when working due to friction, the pulley and the zipper are electrified.

A. There is electricity in the pen.

B. Finger touches the tip of the pen.

C. Pieces of polyethylene have become electrified by rubbing.

Question 5: Which of the following statements is incorrect?

A. All objects are capable of electrification.

B. The Earth attracts objects so it is always electrified.

C. Many objects, after being rubbed, become electrically charged objects.

D. It is possible to electrify many objects by rubbing.

see more: Steps and how to make a high score literary and social argumentative essay

Answer B: Wrong conclusion: Earth attracts objects so it is always electrified

Question 6. In a cold country, in winter, a person wears socks (socks) on a carpeted floor, when he puts his hand near the metal doorknobs, he hears a small click and his hand electrocution. Please explain why?

A. Because when walking on the carpet, there is rubbing with the carpet, so it is electrified.

B. Due to the phenomenon of electric discharge between the person and the door handle.

C. Both A and B are wrong

D. Both statements A and B are correct.

Answer D: In a cold country, in winter, a person wears socks (socks) on a carpeted floor, when he puts his hand near the metal doorknobs, he hears a small click and a human hand that was electrocuted.

The reason for this is because:

+ When walking on the carpet, there is rubbing with the carpet, so it becomes electrically charged => hear a small crackle

+ When you put your hand on the metal doorknob due to the phenomenon of electric discharge between the person and the doorknob => that person’s hand is electrocuted.

Based on the characteristics of an electrified object, it has the ability to attract other objects or discharge sparks to other objects. So if we want to know if an object is electrified or not, we need to bring the object to be distinguished. Mastering the principles of negatively charged and positively charged objects will help you better apply and explain phenomena in daily life.