1. What is refraction of light?

What is the cause of the refraction of light?

When light hits different media, it will have different speeds, which proves that the medium is a serious influence on the transmission of light. According to scientific research, the phenomenon of light refraction is caused by 2 reasons:

– One is: Speed ​​is changed. When light is refracted (aka bent) more, it has been made to speed up or slow down.

– Second: Angle of incident ray. The amount of light refraction will also be more when entering the larger angle. But when light enters at a 90 degree angle to the normal surface, the light slows down and doesn’t change direction.

Example: Take a glass beaker filled with water then place a drinking straw on its side inside the cup. Observation will see that the reflected light transmitted from the straw is no longer transmitted straight, but has been broken at the interface between the two media, air and liquid. Because of this, when we put the straw in the cup of water and observe, we see that the straw seems to have been tilted partially.

Explanation of the phenomenon:

Our eyes can see everything because of light and light always travels in a straight line. When we look at an object (not a light source) and the light from the emitted light source hits the object, depending on the angle and color of the light source, our eyes will observe different shapes of the object. need to be observed.

2. What is the law of refraction of light?

see more: Explanation of regulations on refractive errors of eyes when enlisted in the army

– r is the angle between the light ray traveling from the interface to medium 2 and the normal to the plane separating the two media.

– n1 is the refractive index of medium 1.

– n2 will be the refractive index of medium 2.

With the above formula, we can state the law of refraction of light which is explained as follows:

see more: What is the rated current? Symbols, formulas and calculations?

3. Refraction of light when traveling from water to air and vice versa:

When a ray of light travels from air to water:

The refracted ray lies in the incident plane

When a ray of light travels from water to air:

The refracted ray lies in the incident plane 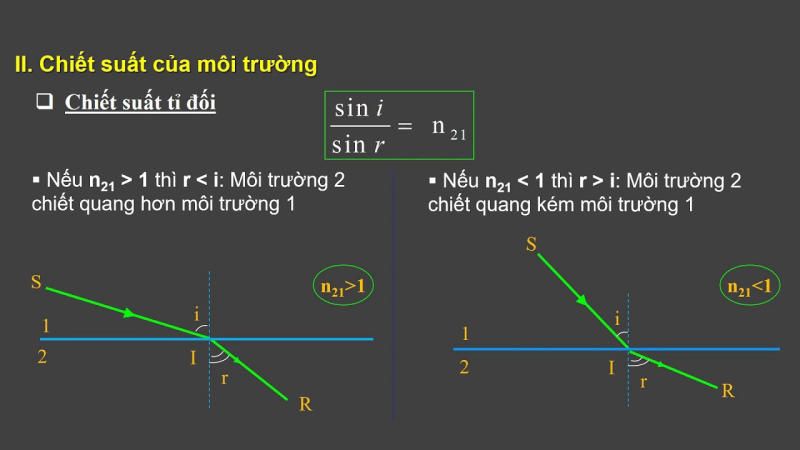 – If n21 < 1, then r > i: The refracted ray is deviated further from the normal axis, we say that medium 2 is less refractive than medium 1.

Table of relative refractive index of some media:

see more: What is magnetic field? Nature? What is the right hand grip rule?

In addition, it has been shown that: The absolute refractive index of transparent media is inversely proportional to the speed of light in such media: n2n1=v1v2

We can set up the formula:

n2 is the absolute refractive index of medium 2.

see more: What is refraction of light? Cause and formula?

n1 is the absolute refractive index of medium 1.

Relationship between absolute refractive index of a medium and velocity:

v is the speed of light in the medium under consideration.

The refractive index of vacuum is 1.

see more: What is mechanical motion? Types of exercises and examples?

All other transparent media have absolute refractive index greater than 1.

Some other relations of the law of refraction of light that you need to keep in mind: 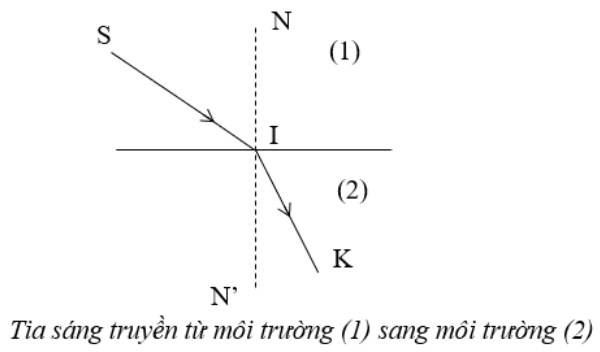 The propagation of light is reversible, which means that whatever path light travels, it also travels back in that direction.

see more: On which plains does the Truong Giang River and the Yellow River flow?

From this property you will have the formula:

6. Application of the phenomenon of light refraction:

Besides, thanks to the theory of the phenomenon of light refraction, humanity can clearly understand why when observing in the night sky, we can see twinkling stars. Because at night, when you look up at the dark sky, you will see the light from the stars being refracted many times as it travels from space and through the atmosphere to Earth.

7. Some exercises on the law of refraction of light:

Question 1: Why is it that when a rod or a straight stick is tilted in a glass of water, the rod is no longer straight, but tilted at a different angle? When removing the straw from the cup, or plugging the straw vertically into the cup, we do not observe the above phenomenon anymore?

Light is refracted as it passes out of the water, giving the illusion that objects in the water appear to be both distorted and closer than they really are. The wave must first travel through water, then through the glass-water interface, and finally into the air. The light waves coming from the sides (front and back) of the tube are deflected to a greater extent than the waves coming from the very center of the tube, making it appear larger than it really is.

Question 2: Why do we see the phenomenon of the starry night sky?

see more: What is a pulley? Types of pulleys? Classification and applications?

At night, when you look up at the sky, you see twinkling “stars”, which is caused by the light from the stars being refracted (broken) many times when traveling from space through the atmosphere. Earth.

Question 3: Why is the basin full of water, when viewed from the side, the water becomes shallower?

In the same type of medium, light always travels in a straight line-the shortest path. But it goes from one type of medium to another, for example from air to water, or from water to air, because the speed of light in those two types of media is different, on the interface. of the two media, the light will be bent, following a meandering path. This type of phenomenon of light is called refraction of light. Your water bowl looks shallow because of the refraction of light.

Question 4: Why does a fisherman who uses a harpoon to launch a fish under the water do not launch directly at the fish, but aim a bit further away?

Answer: The image that we see fish in the water is a bent light ray that changes direction. Thus, the naked eye cannot perceive, so the position of the fish is easy to be mistaken. The position of the fish in the water and the visible image is different. Experienced people decide not to rush into the fish because it is just a virtual image of the fish. If you launch into a place slightly farther away, you will definitely hit.

Question 6: A ray of light travels from water and is refracted into air. The refracted ray and the reflected ray at the water surface are perpendicular to each other. Water has a refractive index of 4/3. What is the angle of incidence of the light ray (round number)?

see more: Steps and how to make a high score literary and social argumentative essay